Prepare for teaching or graduate studies through the Honours program at UBC Vancouver.

This program is highly specialized and designed for students with at least a B+ average in both their French courses and their overall degree program. It provides the necessary background for graduate study and a particularly strong preparation for those intending to teach French at the secondary level.

To enter the Honours program, a student must have:

Student wishing to enter the Honours program must apply directly to the Major and Honours using the online Advising Contact Form.

Cluster A: French Literature and Culture from the Middle Ages to the Revolution

Cluster B: French Literature and Culture since the Revolution

The Honours Essay represents an extended personal research project (in finished form usually about 35-40 pages typewritten) carried out under the supervision of two members of the Department’s Graduate Faculty: a supervisor who will meet regularly with the student and a second reader.

Preliminary research on the topic chosen is expected to be completed by mid-term, at which time the candidate is required to submit for approval a detailed outline of the projected work. The finished essay is due on the last day of lectures of the term.

The Honours Essay is seen less as an original contribution to knowledge than as a means for providing the student with an opportunity to become familiar with the methodological problems of research as well as with the techniques and problems of scholarly writing.

Students who are planning to do an Honours Essay must submit a proposal to the Major and Honours Advisor. The proposal must include a one-page abstract, a bibliography, and the names of the two professors who are willing to supervise the work.

The proposal should be submitted by November 1, if the student intends to register in this course in January (FREN499-201).

The proposal should be submitted by March 1, if the student intends to register in this course the following September (FREN499-101) 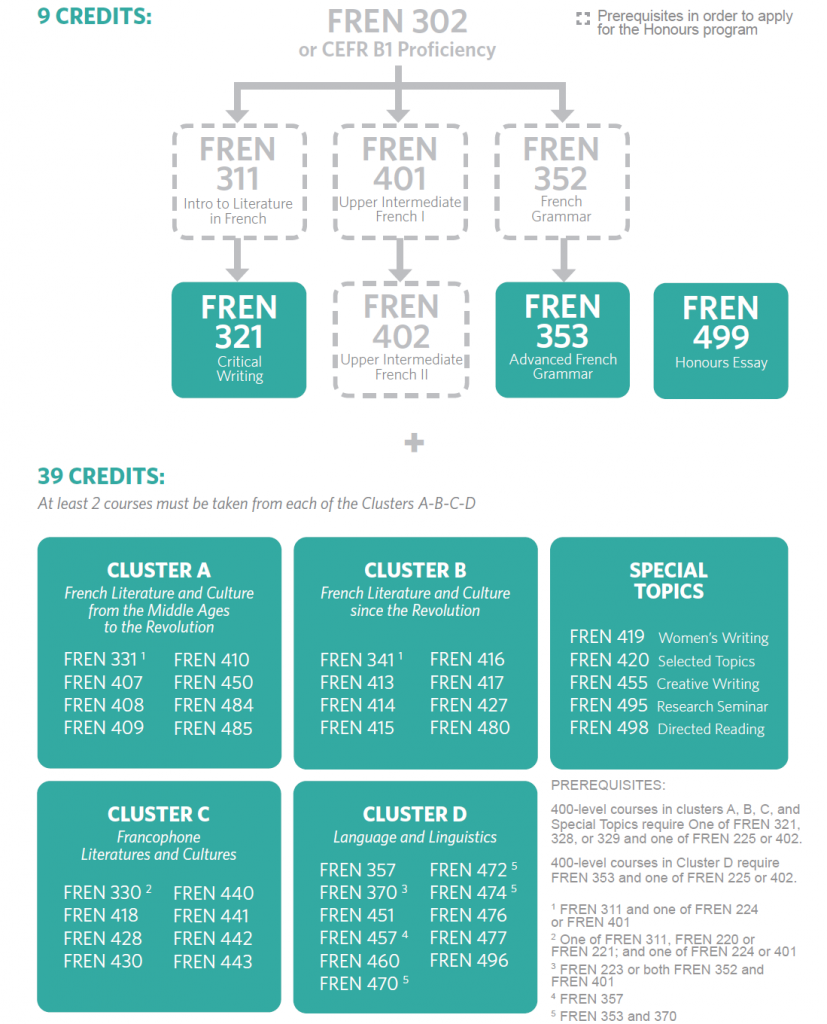 Applying for an Honours

Apply for an Honours
Apply for the Honours program in French Studies by contacting the Student Programs Coordinator.