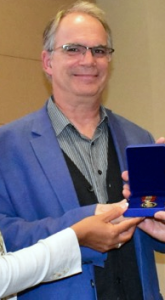 Congratulations to André Lamontagne, UBC Professor of French and Québec Literatures, for being awarded the prestigious Sovereign’s Medal for Volunteers.

Awarded by the Governor General of Canada, this award recognizes exceptional volunteer achievements by Canadians from across the country and abroad in a wide range of fields.

In parallel to his academic career at UBC, André Lamontagne has been involved in the Société historique francophone de la Colombie-Britannique and the Fédération des francophones de la Colombie-Britannique for over a decade. From organizing French seminars and literary prizes to advocating for access to social services in French, he is an active and engaged promoter of the French language in the West Coast.