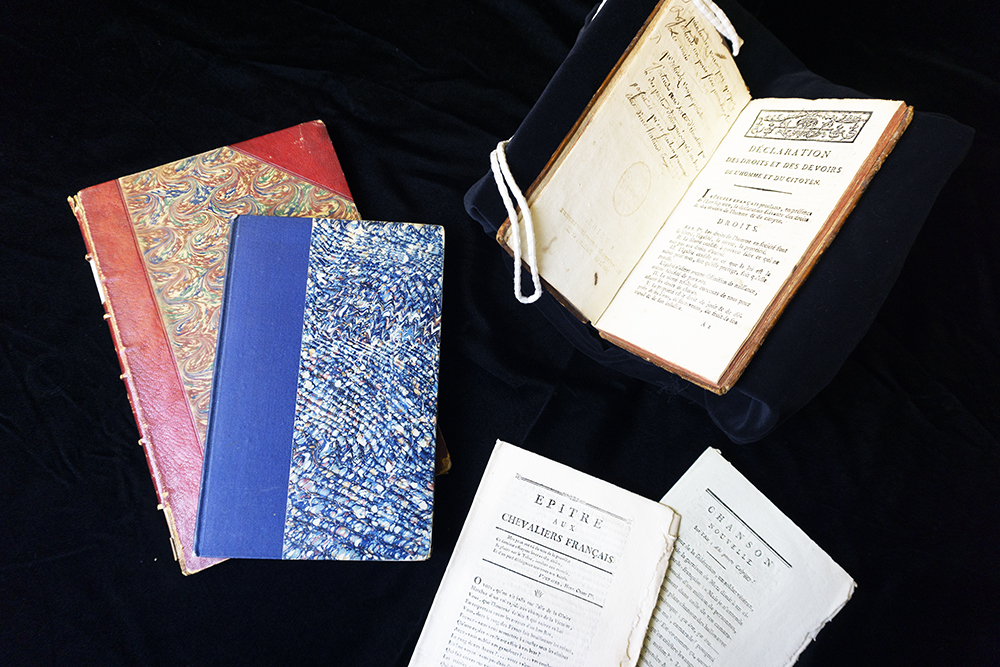 Vancouver, BC — Students, researchers and members of the wider community will now have access to newly acquired original pamphlets from the French Revolution through the University of British Columbia, thanks to a partnership between the Department of French, Hispanic and Italian Studies (FHIS) and UBC Library. Public lectures, exhibits, and opportunities for collaboration among researchers across the globe are expected to arise from this long-term project.

A new research seminar offered this January will allow students to work directly with the primary sources — not from behind glass displays or digital screens, but with their very own fingertips. “The pamphlets will not be displayed behind a glass like in a museum. Students can actually work with them, feel them and see beyond the objects,” explains Associate Professor Joël Castonguay-Bélanger, who designed the course.

“History is not just something you read about in textbooks or on the Internet. People who lived before us left physical traces, as did major social and political events that shape our world today. By physically encountering these texts with their senses, I hope students will develop a deeper understanding of how ideas circulated during the French Revolution, and how they played a major role in the way people understood the events they took part in.”

Chelsea Shriver, a librarian at UBC Library’s Rare Books and Special Collections, has been working closely with Castonguay-Bélanger to expand the original French Revolution Collection acquired by the Library in the 1970s. “As much as we think digital natives aren’t as interested in tangible books anymore, it’s very heartening to see how students connect even more with the subject matter after engaging with the physical materials. There’s a difference between reading someone else’s interpretation of historical events through peer-reviewed articles, and creating your own original scholarship using primary sources.”

Students’ projects are designed to support the Library’s plans for digitization. “Down the road, we plan to digitize these materials and make them more accessible to the wider research community,” says Shriver. “Digitization allows us to engage in collaborative projects with other institutions so that scholars from around the world can pull from our resources and metadata.” 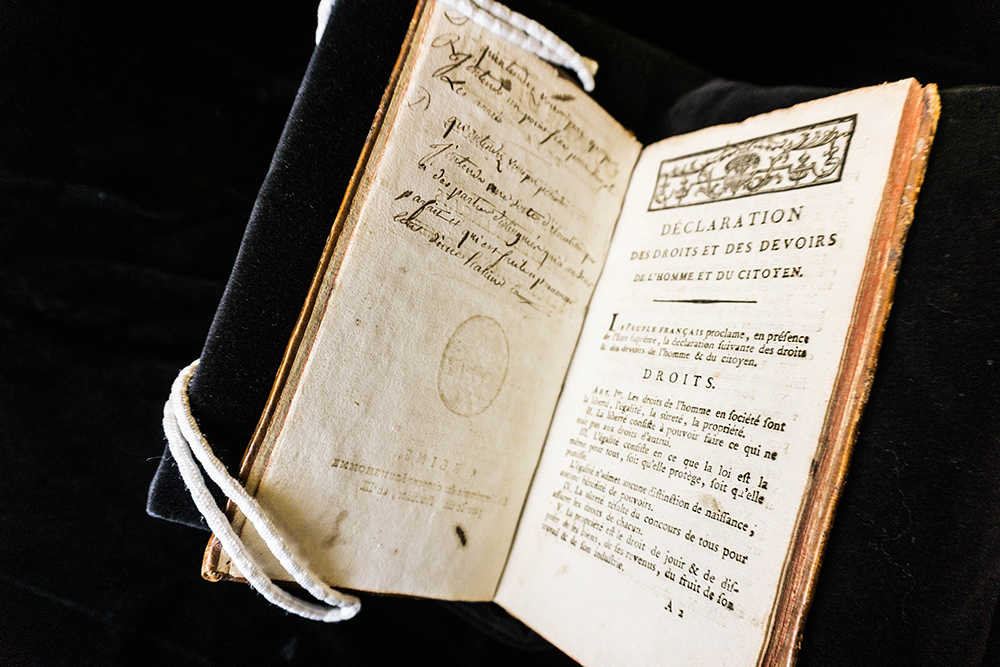 The UBC Library French Revolution Collection contains a wide variety of original materials that simultaneously reflected on and contributed to the chaos, turbulence and radical transformation that took place between 1789 and 1799. From replacing the monarchy with a democratic regime that shifted power from the king to the people, to emphasizing the idea of “human rights,” the significance of the French Revolution can hardly be overstated.

“Many other revolutions around the world looked at what happened in France as a model or counter-model of how to make major political shifts,” says Castonguay-Bélanger. “In the 18th century, you can already find practices and behaviours that would later re-emerge in totalitarian regimes or whenever you have some sort of political upsurge. The French Revolution and other revolutions in the past give us many things to think about in our modern era.”

Notable pieces in the collection include La semaine mémorable (The Week to Remember), written in July 1789, a few days after the Bastille was taken, and Constitution de la République Française: proposée au peuple français par la Convention nationale (Constitution of the French Republic: Proposed to the French People by the National Convention), a constitutional document written in 1795 heralding the notion that all human beings have the right to liberty, equality, safety, and ownership, regardless of their origin of birth.

There are shockingly crass pieces in the collection as well. Le Père Duchesne and La Mère Duchesne series were infamous for using outrageously foul language to instigate and provoke, adding popular flavour to the political commentary of the day. “They used swear words every two sentences. That’s the kind of thing that most students have probably never encountered,” Castonguay-Bélanger remarks, with a chuckle. “I say that it’s funny, but it actually had big consequences. These texts endangered people’s lives.” 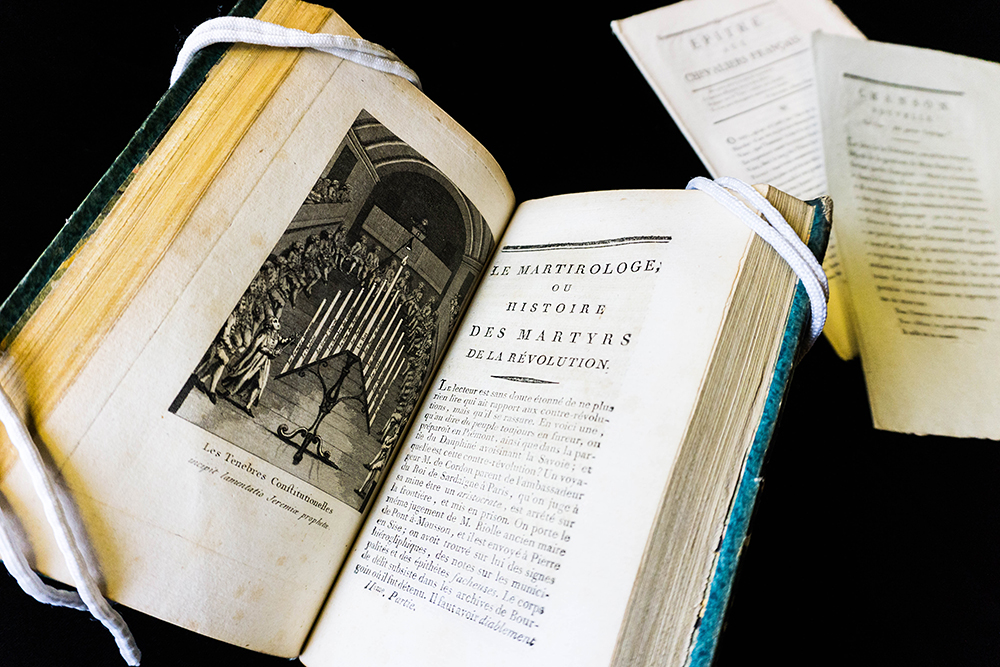 Poems, songs, and plays are also included in the collection, shedding light on the leisurely lives of French citizens.

“With a country that is upside-down in chaos, you’d think people were just chopping each other’s heads off and that there was blood everywhere, but there is much more to understand about the French Revolution than the guillotine. Despite a decade of political instability and conflict with the rest of Europe that cost thousands of lives, French people kept reading novels and newspapers, writing songs, and attending theatre,” Castonguay-Bélanger explains, on the significance of art and culture. “The texts published during those years not only represented, but shaped the political discourse of the time. Not all people could read, so the orality of songs and plays was important.”

Although many authors remain unknown, some pamphlets were written by famous political figures such as Maximilien Robespierre, known for his role in the Reign of Terror that resulted in thousands of executions by guillotine. There are also pieces by Jean-Paul Marat, a strong political agitator nicknamed the “Friend of the People,” who frequently used pamphlets to accuse aristocrats and clergy deemed enemies of the nation.

“You can’t look at an item like that and not think, ‘Wow, that small object contains the weight of history,’” says Castonguay-Bélanger. “Obviously, these pamphlets can’t be purchased on Amazon. These are original. That’s one thing I hope students in my classroom will embrace: old books are exciting!” 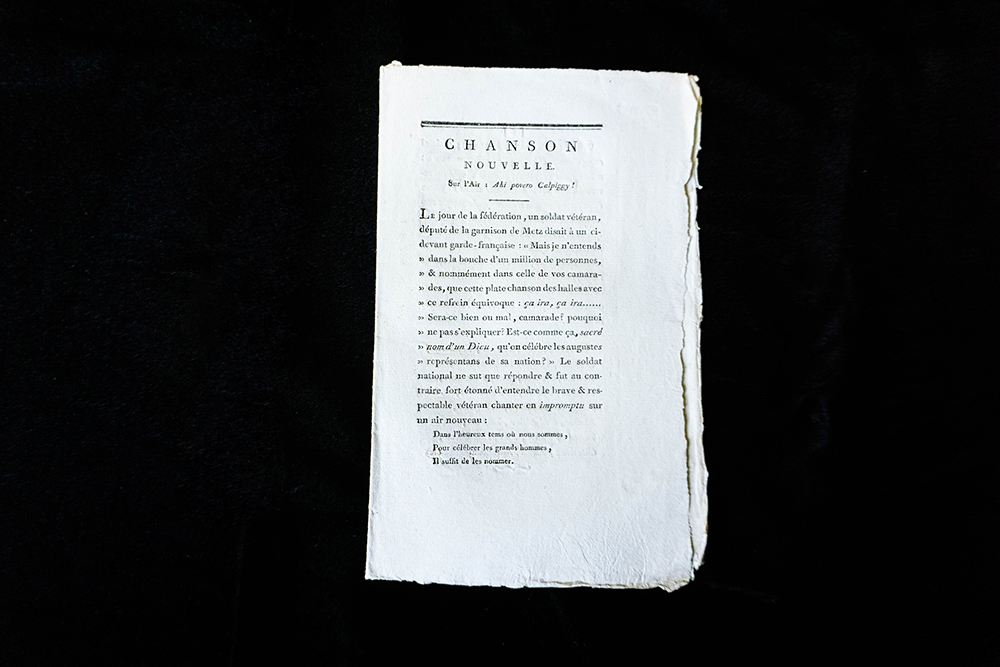 UBC Library purchased the original 111 pamphlets in the French Revolution Collection as a single collection from Martinus Nijhoff: Antiquarian Book Dealers in The Hague more than 40 years ago. After receiving a generous endowment from Dorothy Dallas, former professor of French literature at UBC, a natural partnership formed between the Library and FHIS to continue expanding the collection, with funds dedicated to the advancement of research in 17th and 18th century French studies.

The impact of this new partnership will extend far beyond the Library. “Next term, we will offer opportunities for the public to engage with the collection,” says Castonguay-Bélanger, who hopes the acquisition will reach a much larger audience. “One of the leading historians of the French Revolution, Dr. Keith Baker from Stanford University, will be visiting UBC to give a public lecture in February. To accompany this event, two research assistants are currently working with me on a small exhibit that students enrolled in my course will also contribute to.”

“That’s one of the most exciting aspects of a partnership like this one,” Castonguay-Bélanger adds. “It brings a variety of people together – students, professors, librarians, research assistants, donors, and staff members alike.”

The course, titled “FREN 410: La Révolution française: histoire, fiction, débats,” will be offered in French during Term 2 of the Winter Session. Interested students are encouraged to register online. Those who would like to view the French Revolution Collection can visit Rare Books and Special Collections in person.

About the UBC Library Rare Books and Special Collections
Rare Books and Special Collections at the University of British Columbia Library houses significant collections of rare books, archival materials, historic maps, photographs, broadsides and pamphlets. RBSC supports primary research by scholars from UBC and around the world and their resources are used extensively by members of the general public in British Columbia. Learn more at https://rbsc.library.ubc.ca.