“In order to understand the specific context of early French literature, it is sometimes useful to forget what we know about a given genre and focus on its earliest proponents—in all their glorious oddness—unencumbered by later rules and traditions.”
Patrick Moran
Assistant Professor, French Studies 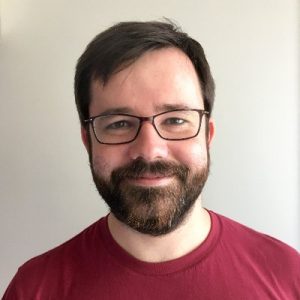 My project, titled “Poetics of Genre in Medieval French Literature: A Cognitive and Philological Investigation,” focuses on the emergence of literary genres in the 11th and 12th centuries, when Old French literature was just beginning to develop and free itself from the Latin tradition.

Early medieval literature is wildly experimental: authors are constantly inventing new poetic forms, new topics and new ways to express themselves, and it takes time for their production to solidify into recognizable genres.

I am particularly interested in these early days of literary activity and in what they reveal about how we classify and categorize texts.

Genre is one of the basic building blocks of literature (and of the arts in general). As readers, we make assumptions about texts based on what we know about their genre: is this text a poem? a novel? a play? an essay? What do I know about poems, novels, plays or essays that can help me navigate this text? Genre is just as important for authors as it is for readers: it gives them guidelines, rules to follow or to break, expectations to satisfy or to subvert.

But although genre is everywhere, it is particularly hard to define. A genre, strictly speaking, is a class of texts: some genres are dead and buried – nobody writes medieval fabliaux anymore – while others, such as the novel, seem to be constantly expanding and adding new works to their fold. But a genre isn’t just a list of texts: it is also a set of rules, or guidelines, or maybe just traditions, that most authors who choose to write in this given genre will try to follow. It is also a series of expectations based on these “rules”: we do not expect to react to a tragedy the way we react to a comedy.

For many centuries (from the Renaissance to the Romantic age, roughly), Western scholars believed that genre was an intrinsic property of texts (every text objectively belonged to a specific genre) and that there was a fixed list of genres (no additions, no deletions). Current genre theory takes a more fluid approach and recognizes that a single text can be many things, depending on the author’s intentions and background, audience expectations at the time of writing, varying cultural contexts, as well as evolving tastes and perceptions in the decades and centuries after the text’s publication. The medieval period is particularly interesting in this regard: authors and audiences built rules and traditions as they went along, and many odd or ambiguous texts emerged as a consequence of this.

Part of my approach is based on material philology, i.e. the study of texts in their manuscript context. Medieval manuscripts reveal much about how texts were read, categorized and defined throughout the Middle Ages, and medieval scribes played a crucial role in offering these works to a variety of audiences. I have selected a dozen texts that are either early representatives of their genre, or that are notoriously hard to categorize, and I am examining them in their manuscript context — from the earliest manuscripts we possess of these works to the latest — focusing on how they are referred to, which other texts they are collected with, and how these elements evolve over the period.

The second part of my approach is cognitive in nature. Genre is not an intrinsic property of texts; it is a form of categorization that is constantly built anew by authors and their successive audiences. Cognitive linguistics has been instrumental in renewing our understanding of how our mind constructs categories (especially through the foundational work of Eleanor Rosch and George Lakoff). Genres are a historical phenomenon, but genre, the impulse to classify literature, is universal. I am interested in what the medieval period can tell us about our own mechanisms of categorization and concept formation, as well as the ways in which our modern perception of medieval genres may differ from how they were perceived at their point of inception, and what this reveals about our preconceptions. 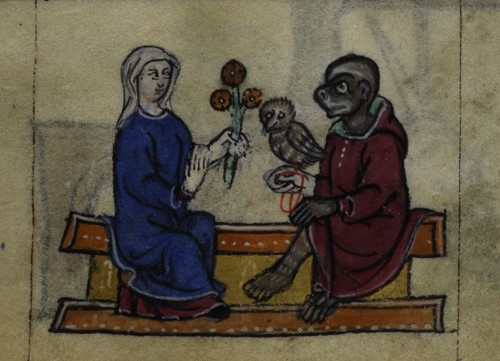 A courtly scene between a lady and a monkey (British Library, Stowe 17, f. 62r)

My work so far has concentrated on the disconnect between medieval genres as we can see them in manuscripts, and the genres that modern medievalists have applied to the literature to the Middle Ages since the discipline of medieval studies was developed in the 19th century. Early medievalists wanted to fit medieval literature into overarching categories that they were familiar with, such as epic poetry and drama, and they often dismissed manuscript evidence in order to classify texts into rigid categories. Medievalists also have the benefit of hindsight: when we study a medieval genre such as chanson de geste or Arthurian romance, we can encompass every single exemplar of the genre, from its inception to its final demise.

But in order to understand the specific context of early French literature, it is sometimes useful to forget what we know about a given genre and focus on its earliest proponents—in all their glorious oddness—unencumbered by later rules and traditions.

In addition to presenting my research at two upcoming academic conferences in 2019 (Exeter, UK, in July and Quebec City in November), I plan to set up a research blog (in English and French) in the fall. The blog will showcase my research for a wider audience, through posts that aim to be more evolving and less formal than traditional scholarly publications.

The Middle Ages are a popular topic in contemporary culture; my project strives to move beyond stereotypical representations of medieval culture and literature as rudimentary, traditional and uncritical, by emphasizing the experimental aspects of medieval textuality, its boldness and its relevance to modern debates on genre, canon and “high” vs. “low” culture.

The more cognitive aspects of the project are also particularly interesting to a wider audience, as cognitive theory deals with everyday aspects of the mind and with thought experiments that help understand our mental workings. Our perception of the world, mediated through language, is built on categories; understanding the mechanisms that underlie these categories can help us better grasp (and criticize) our own thought processes.

Dr. Patrick Moran is a recipient of the Hampton Research Grant, which provides funding for the early stages of smaller-scale research. 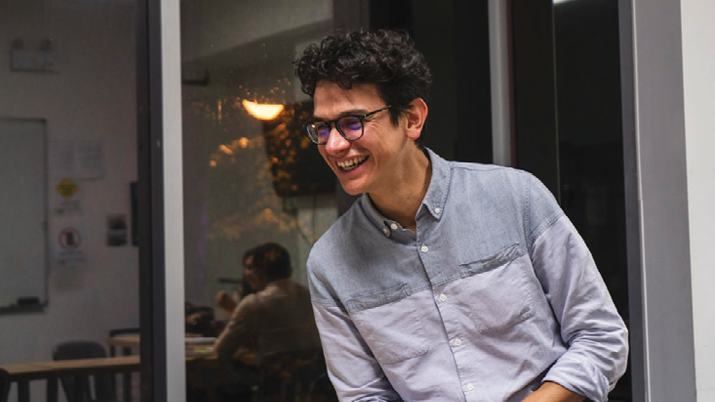 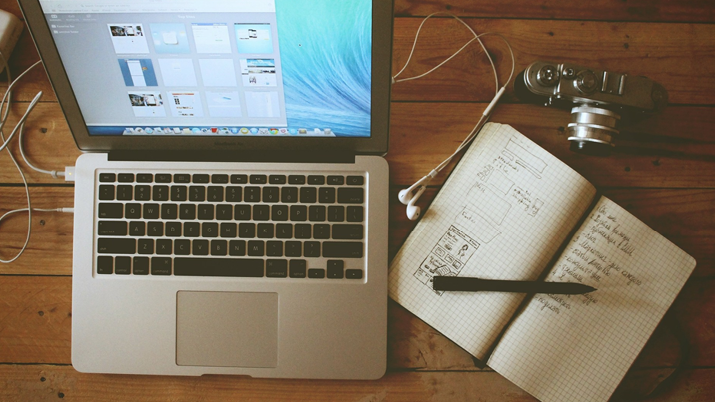