The Shifting Foundations of Modern Nation-States 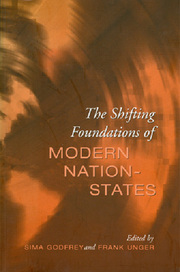 Nation-states today are under pressure from opposite directions. In Western Europe, they are being challenged by the call of assimilation into a larger supra-national polity. Elsewhere, as in Southeastern Europe, nation-states are being challenged by separatist forces from within, demanding independence or self-determination for particular ethnic groups. In either instance, the ultimate aim is not simply the breaking of bonds but rather a realignment of belonging.

When the prospect of prosperity and the good life requires an adjustment of national identities and alliances, old myths and new tales alike are mobilized in the effort. People’s choices of belonging are flexible and often blatantly pragmatic. Some will never renounce their original ‘nation,’ while others gladly assume two or three national identities in a lifetime, all of them with a deeply felt commitment. In The Shifting Foundations of Modern Nation-States, Sima Godfrey and Frank Unger have gathered together a distinguished, multidisciplinary group of authors to discuss national myths from Europe, North America, and Asia. Just as the plurality of nations implies diverse voices and distinct narratives, the authors, coming from different disciplines and backgrounds, represent multiple discourses on the theme of nationhood.