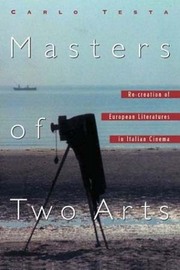 The movie screen has been the forum for many star pairings: Bogart and Bacall, Tracy and Hepburn, and Fellini and Kafka. While this latter combination might seem slightly unexpected or improbable at first sight, Carlo Testa’s Masters of Two Arts demonstrates that pairings of famed directors and writers are commonplace in modern Italian cinema. Surprisingly, the study of the interrelation between Italian cinema and European literature has been almost completely neglected in film scholarship. Testa addresses and attempts to correct this oversight with nine in-depth analyses of the one-on-one rapport between an Italian filmmaker and a “classic” name in modern European literature. Looking at combinations such as Pasolini and Sade, Rossellini and Stendhal, and Visconti and Mann amongst others, Testa uses theoretical as well as historical methods, showing how the respective text undergoes not ‘adaptation’ but full ‘re-creation’ (as defined by Èizenshtein) in a different art form and, even more importantly, in a new cultural context.