Serena Huang won first place at the FHIS Undergraduate Forum for her poster presentation on studying abroad in Lyon, France. The poster included excerpts from blog posts she had written about her experiences. Here, she elaborates more on the value of traveling. 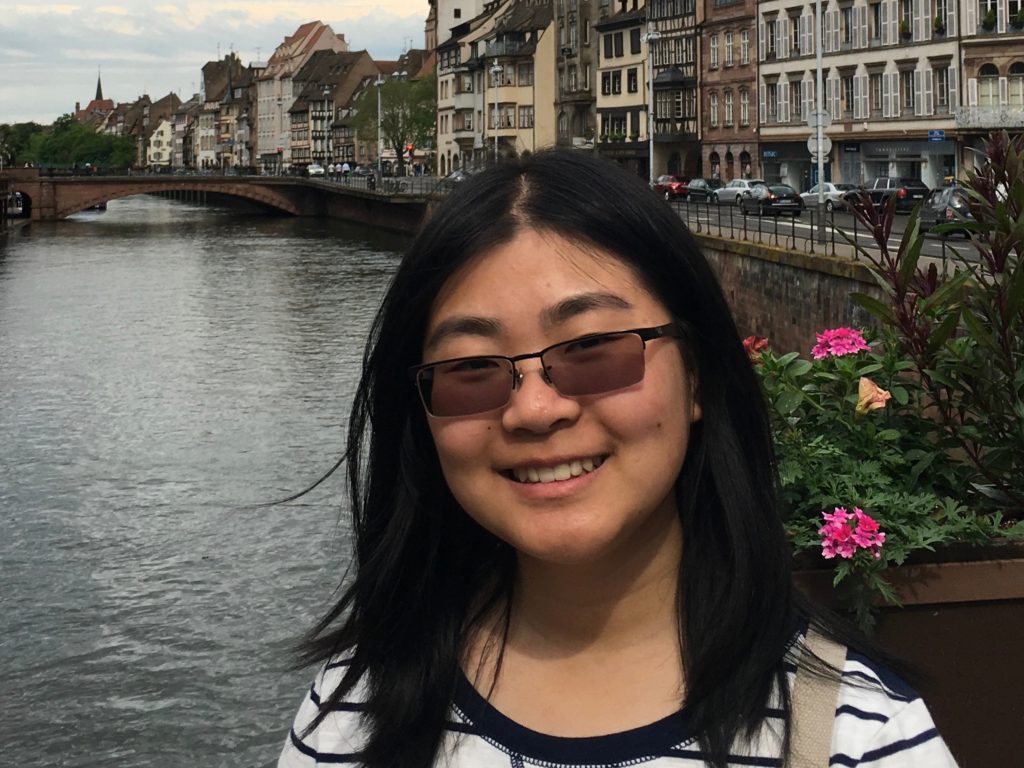 Our impromptu travels led us to Strasbourg, on the border of France and Germany, where we admired the beauty of the historic city centre.

“Traveling helps you learn the language in context. You meet native speakers and get to see how your language skills are relevant in real life—not just in the classroom.”

I went to Lyon, France as part of a Global Seminar where UBC students take a course led by a UBC professor in another country. It’s basically a typical summer course, with three-hour lectures and a final exam, except you get to travel and earn credits at the same time.

We often went biking and had field trips to nearby cities and museums. On weekends, we had free time to explore on our own, so most of us traveled to other cities in France; some of us even went to Switzerland or Spain. Joël, the professor who led the seminar, wanted us to get the most out of the experience as possible, so he even let us go to Paris the weekend before our final!

The theme of our French 329 course was Travel Writing. Writing about my experiences and traveling to new places are among my greatest passions, so this course was the perfect opportunity to deepen my skills in an area that I highly enjoy. We studied books from French travel writers and wrote our own blog posts according to different topics each week. The poster I created for the FHIS Undergraduate Forum features excerpts from these blog posts.

It’s amazing to be in a place where the language is spoken and to hear it around you all the time. Your French improves dramatically. Traveling helps you learn the language in context. It’s rewarding; you meet native speakers and get to see how your language skills are relevant in real life—not just in the classroom.

Annecy, located a couple hours away from Lyon, is sometimes called the “Venice of the Alps,” and given the beauty of the city, it’s easy to see why!

My host mother told me that the greatest reward of traveling was growth and self-discovery. Although this wasn’t my first time traveling alone, I did feel like I grew in independence as the two-month trip was the longest that I had taken at that point.

One Friday night, at 11pm, my friends and I decided, “Let’s go somewhere tomorrow!” So the next morning we spontaneously showed up at the train station at 7am and bought tickets. We had plenty of adventures like that, and I learned a lot about the logistics of traveling.

We often studied in cute cafés around the city after class, and this one offered an excellent caramel cake with marshmallow frosting.

My host mother had two adult children who had already moved out, so I stayed in the room that belonged to her son. I pondered what it was like to view the city through the eyes of a local; living in his room gave me that connection.

Our host mother would cook us French food every night, which was delicious. She’d introduce us to her neighbours when they came over, and we attended an apartment barbeque one day and met many of the residents in the building.

The school where we studied was a little far from where I lived, but the path ran straight through a park next to a river that offered a view of the basilica, and it was sunny often enough that I didn’t mind the 40-minute walk. I passed locals out walking their dogs and kids skateboarding through the park, so there was a really lively atmosphere.

I learned a lot of little things, like the fact that the French ate dinner really late (we wouldn’t have dinner until 8pm every night, which was later than when I would usually eat at home). I also discovered that the French went on strike a lot. At some point, if you needed to take a train and discovered that the workers were on strike, you wouldn’t even be surprised anymore! These were among the little things that I learned that you wouldn’t really think about unless you were living there day-to-day.

Reflections on Art and History: 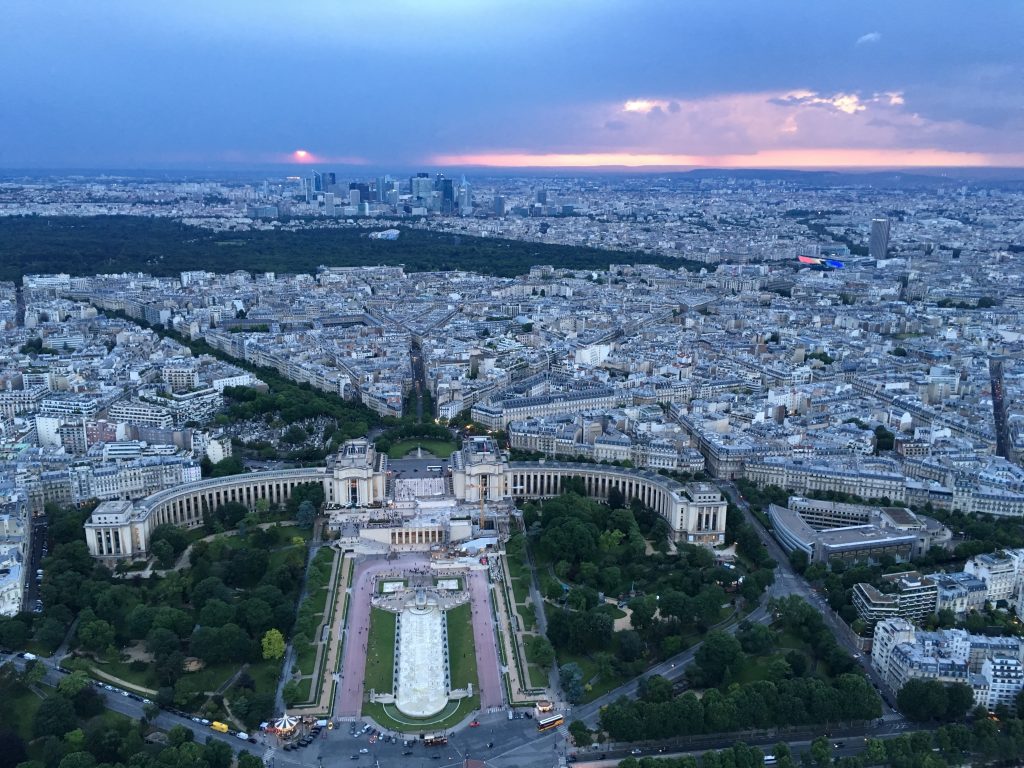 One of my favourite moments from the entire experience was watching the sunset over Paris from the top of the Eiffel Tower.

Lyon is famous for the giant murals that are painted on the sides of buildings. There is one mural that has illustrations of famous people who were born in Lyon, such as Antoine de Saint-Exupéry, who wrote The Little Prince. In another mural, the appearances of the people are changed over time so they look like they’re aging. If you see it many times over the span of 50 years, you can actually see them grow up from children to adults! The murals are one of my favourite parts about the city.

Reflections on Embracing the Unexpected:

I wasn’t expecting to meet my best friends in university during that experience. It’s been four years since the Global Seminar, but we still hang out a lot, which is nice—even if they graduated two years before me and have full-time jobs (I took a placement test after grade 12 and got placed in 300-level courses during my first year, which is why a lot of my friends are three years older than me!). I’m also still in touch with Joël, our professor, whom I’ve taken three classes with with throughout my undergraduate degree.

My advice to undergraduate students is to get involved. I work at the Global Lounge, a hub for international-focused groups and clubs, as a program coordinator for the Tandem Language Exchange program. This has helped me feel connected to the community. I also encourage all language students to speak their language as much as possible, because you never know what kind of doors it could open for you! Finally, travel whenever possible — it’s one of the best ways to discover the world and truly deepen your appreciation for everything around you.

Read the rest of Serena’s blog at http://blogs.ubc.ca/serenaenfrance 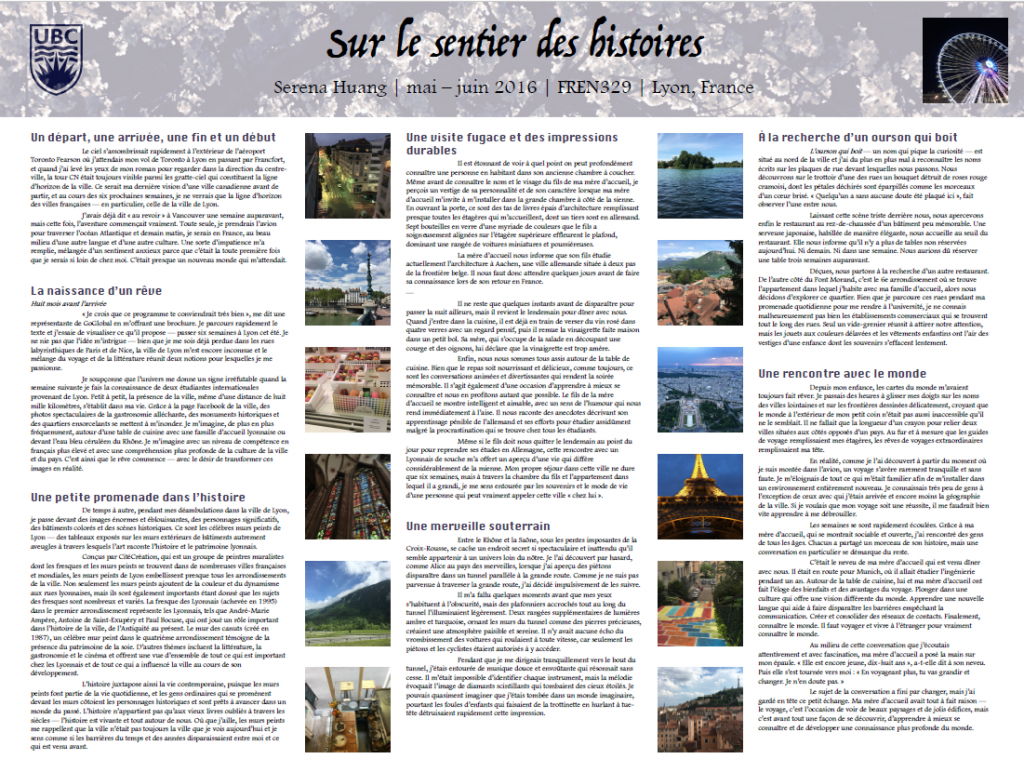