Jon Beasley-Murray, Associate Professor of Spanish, describes his vision behind the open access videos for “LAST100: Introduction to Latin American Studies,” including topics that are covered, the necessity of questioning representation, and the importance of Latin America as a region of study. 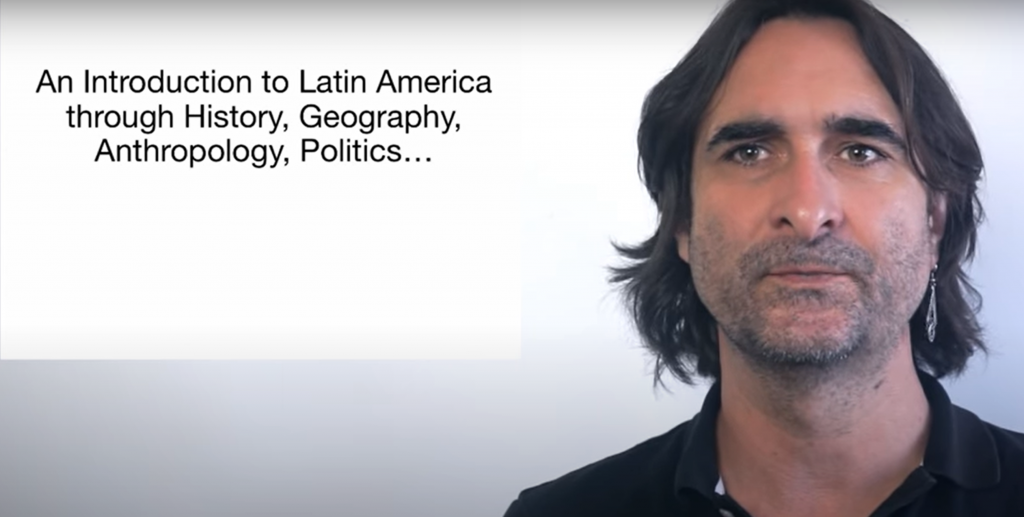 I have been making a series of videos for “LAST100: Introduction to Latin American Studies,” with initial funding from the Teaching and Learning Enhancement Fund.

These videos touch on key moments from the past 500 years or so, from a vast and diverse region ranging from Tierra del Fuego to the US border and beyond. They also engage with conceptual and theoretical issues that may help us think about other contexts too.

There are four types of videos, all posted publicly on YouTube under a Creative Commons license that means anyone can re-use or adapt them as they wish, so long as this is for non-commercial purposes.

There are weekly “lecture videos,” around 15-20 minutes long, in which I go over a portion of the material that we are covering that week. This ranges from the arrival of Christopher Columbus in the “New World” to contemporary issues such as the impact of our current ecological crisis, passing through analyses of figures or events such as the colonial experience, US intervention in the region, Evita Perón, Che Guevara, and so on. There is often a short but close reading of a text, such as a poem by the Nicaraguan writer Rubén Darío, or a discussion of a movie scene featuring Brazilian actress Carmen Miranda.

In “interview videos,” I draw on the expertise of colleagues at UBC and elsewhere, such as Max Cameron in Political Science or our own former colleague Rita De Grandis. These are short conversations that deal both with theoretical issues (what is Modernity? Revolution?) as well as specific moment in Latin American history (the Dirty Wars of the 1970s and 1980s; the Left Turns of the 2000s).

There are also a few even briefer “behind-the-scenes” videos, in which I add material that I don’t cover elsewhere. This is a new concept, and I am thinking of them along the lines of “DVD extras.”

Finally, students in the course make videos themselves, which then form part of the repository of information and analysis that subsequent years can draw upon. This is by far the largest category of videos, and some have a couple of thousand views on YouTube, so they are being seen far beyond the boundaries of this one course.

Once again, this shows that students can be producers of knowledge, and that it is wrong of us to simply think of them as consumers.

In sum, the videos aim to be informative, well-produced, and even fun in their different ways. For instance, I have a little joke in my lecture videos that during the break that divides each of them (when it is suggested that viewers pause the video and consider a couple of questions that I put on screen), I go off and get a drink, different each time … from coffee to mate to rum to beer.

Through these videos, I hope that people will learn something about Latin America—its peoples, cultures, and histories. It is also a region that has had a major, often unappreciated role, in world history.

Latin America is a fascinating region of the world, and it has generated some great stories, some fictional, others not, and still others for which the boundary between fiction and fact is decidedly blurry. Perhaps more significantly, without Latin America, global phenomena such as modernity, industrialization, nationalism, and neoliberalism (to name just a few) would be almost unthinkable. Against the exoticization of distant places, from the very outset of this video series I point out that it is hard to pin Latin America down, and in some sense, it is always already everywhere, even if we don’t realize it.

Ultimately, I am less interested in people learning about Latin America as some kind of fixed and knowable object of study, than in what they (and we) can learn about ourselves from Latin America, i.e. what Latin America teaches us. Through this course and its associated videos, we ask questions about the nature of representation itself, about how we imagine politics and subjectivity, about the process of telling stories (and histories), and about how we envisage our own pasts and futures.

I have always been a strong believer in open access. The university is no ivory tower, and especially at a public university, it is our ethical and political duty to share what we are doing with as broad a public as possible. Otherwise, we are simply pandering to the notion that learning is something that individuals purchase for their own personal self-improvement or betterment.

As far as possible, instead of inhabiting educational walled gardens, we should be trying to dismantle the barriers (largely imaginary, in any case) that separate academia from the rest of the world. But we should do so without losing sight of the fact that the university has a logic different from the rest of the world—not least, for instance, in that it refuses the commodification of knowledge, the idea that anything and everything can be bought and sold. Teaching “in the open” drives this point home.

All this is even more true during our current Pandemic, in which students are “Zooming” in to our lectures from multiple time zones around the world, and we have effectively dissolved the physical space of the university (except in so far as the ongoing development of university land continues to produce revenue). We should take this as an opportunity to re-imagine the role of academia, not simply (or most interestingly) as some kind of “solution” to the problems posed by Coronavirus or whatever, but as a place where we come up with new problems, and challenge the public at large to think of solutions. We should all be teaching in the open now.

In the end, the aim of this video series is to share some problems and questions, openly, with as broad a public as possible. I hope that we can all think through them together.