PhD student Jennifer Nagtegaal explains why she pursued graduate studies at UBC, and how she unexpectedly developed an interest in Hispanic visual culture with the help of her now supervisor.

“The option to come home to Vancouver to study in one of Canada’s top research institutions was enticing.”
Jennifer Nagtegaal
PhD student of Hispanic Studies

After a handful of years teaching in the K-12 system, I could not deny the fact that, while I love teaching, I also have a drive to continue studying and learning myself.

As a previous teacher in BC’s K-12 educational system who sometimes taught Spanish as an additional language in secondary classrooms, I found myself equally excited about teaching my students as I was envious of their occupation as learners, encountering new aspects of the Spanish language, history and cultures daily. I figured that pursuing a graduate degree in Hispanic Studies with the goal of teaching and researching at the post-secondary level seemed like a natural way to marry these two interests. So far, I have not been disappointed!

As someone who entered graduate school with only a vague idea of what I wanted to research and of what my ultimate career goals were, I would say: do not be hindered by similar feelings.

You will come to learn so much about yourself, as well as about your interests, as you journey through your program(s). Whether you end up completing graduate school in whole or in part, you will gain valuable life and career skills that you can take with you on your way.

Graduate school is flexible and rewarding in that it is what you make of it. Any program has its basic demands: course requirements, examinations, readings and research papers, teaching and/or research assistantships etc… but it can also be so much more. Graduate school can provide opportunities for academic service though roles on administrative committees (e.g. job search committees, departmental committees) and leadership roles through the organization of conferences, symposia and cultural events. Graduate studies also provide unique opportunities for networking and traveling to national and international conferences. Earlier this year I participated in the 2020 MLA conference in Seattle, a very graduate-student friendly conference that provides countless networking, career-building, volunteer and professional opportunities for graduate students. 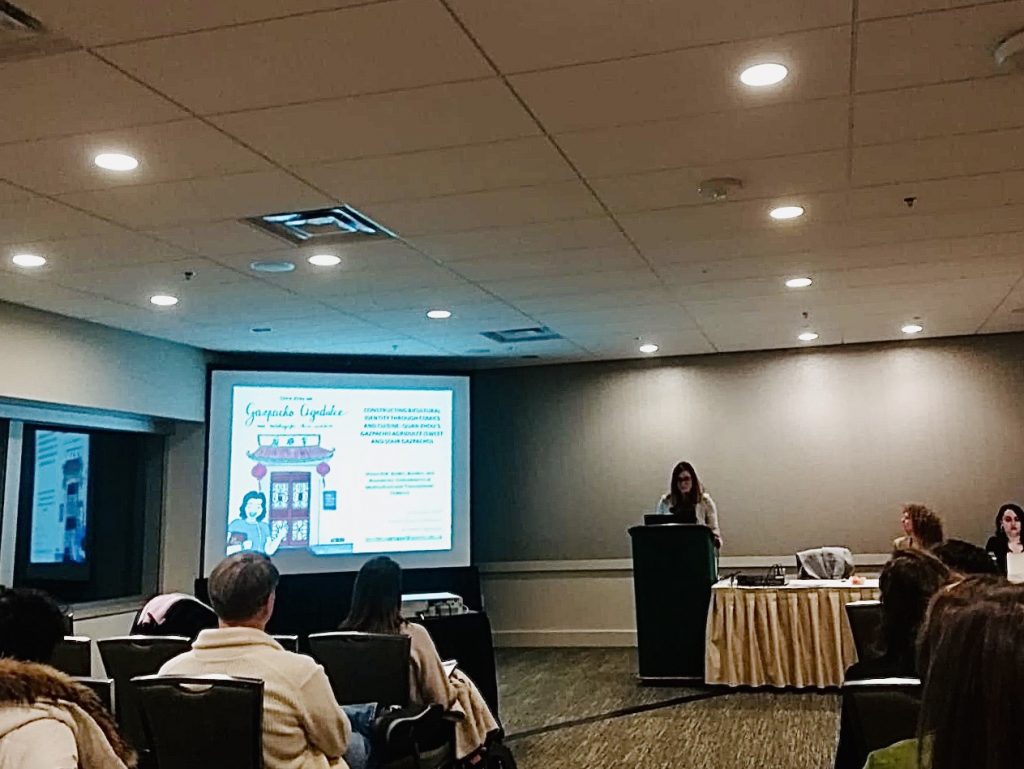 Presenting a paper on “Constructing Bicultural Identity through Comics and Cuisine” at the 2020 MLA conference in Seattle.

The option to come home to Vancouver to study in one of Canada’s top research institutions was enticing.

When I saw the range of fields and topics covered by the group of Peninsularist professors here in Hispanic Studies – such as Dr. Raúl Álvarez-Moreno’s ability to supervise projects within medieval studies and early modern literature and culture, and Dr. Marisol Fernández Utrera’s knowledge of contemporary Spanish literature, visual culture, comics and graphic narratives – I was certain that the Department of French, Hispanic and Italian Studies (FHIS) was a dynamic environment to grow professionally and intellectually. I was also enticed by the funding opportunities that UBC and FHIS could offer its graduate students for research, teaching and travel, and the opportunities I had to participate in its broader, lively community of researchers.

One of the aspects I appreciate the most about our Department—being home to French, Spanish, Italian and Portuguese Studies—is that it provides the chance to collaborate with graduate students and faculty from a variety of fields and literary and linguistic backgrounds. I am able to learn more about these other fields by attending numerous research presentations and events, such as the bi-weekly FHIS Research Forum, the biennial FHIS Graduate Student Conference, and the FHIS Symposium.

I have been fortunate to work with Dr. Marisol Fernández Utrera during the writing of my MA thesis, and now again during the early stages of my doctoral dissertation. While that statement accurately captures the duties that Dr. Fernández Utrera carries out as a graduate thesis supervisor, it is not fair to say that her role and our interactions have been limited to just that. I have received valuable direction and mentorship from Dr. Fernández Utrera on a weekly basis for years now, including continued correspondence and consejos during two parental leaves on my part and a sabbatical on her part.

Dr. Fernández Utrera’s greatest strength as a supervisor is her ability to mentor. This is also true of her role as a course instructor; every assignment and exercise she designs provides some form of professional development or career-building opportunity.

These include learning how to properly design a research paper; producing a publishable book review, conference paper, or scholarly publication; and encouraging students to develop peer-review and presentation skills. If I can list any successes in publishing, presenting my research, gaining funding opportunities, and holding leadership roles, it is largely because I was continually provided the tools and encouragement from my supervisor — not to mention her thorough feedback on countless drafts of my projects and applications.

Lastly, Dr. Fernández Utrera not only works closely alongside her mentees to meet the demands of their program and build their portfolios – fostering and celebrating growth as it happens – but she also builds a sense of community among her mentees, keeping us all involved in each other’s progress and programs.

What are your career goals?

One decade ago, when I was in the teaching program at Simon Fraser University, one of the (admittedly rather cheesy) catch phrases we were given from day one was that teachers are more than just educators; they are “life-long learners”. At the primary and secondary level, this means continually reflecting on your teaching practice, being willing and flexible enough to adapt your teaching philosophy to the new curriculum, teaching practices and technologies, and seeking out professional development opportunities.

However, at the post-secondary level, especially within a research institution, I think the term “life-long learner” is an even more apt description of one’s career. What I feel more assured of with every passing semester is that my career goal is to obtain a position at a research institution that will allow me to build on my training as an educator in new ways and at new levels, yet also allow me to be a perpetual student – engaging in individual and collaborative research projects, presenting at scholarly conferences, participating in forums and research groups, and contributing to the growing field of Comics Studies and Animation Studies. 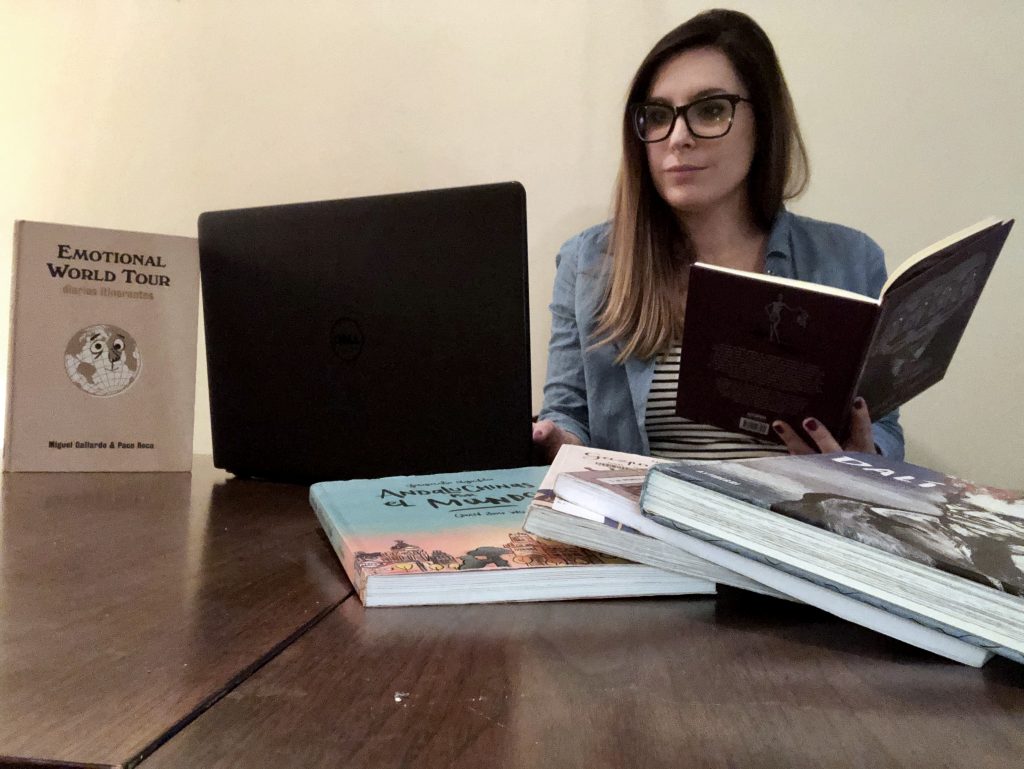 Contemplating comics: Working at the crossroads of Comics Studies and Cultural Studies

My research takes into account drawing in contemporary Hispanic visual culture, specifically within animated documentaries and fiction films, comics and graphic novels. My past and current projects encompass both the political project of children’s artistic production, as well as animation by and for adults.

I largely focus on how various forms of drawing become visually symbolic of marginalized and migrant bodies: the cultural representations of the young and the old; of the physically and cognitively disabled; and of the immigrant and the internally displaced.

My research on contemporary Spanish comics can, at times, also bring me into the realms of pre- and early-modern literature, when these temporally distant fields converge within singular projects. I have done this, for example, in a study of “picaresque drawing” in the comics adaptation of Gregorio González’ El guitón honofre (1604, 2005), and in a project that interrogates the translation and adaptation of traditional travel narrative techniques into modern comics travelogues such as Paco Roca and Miguel Gallardo’s Emotional World Tour (2012).

If you had told me when I was a first-year MA student that I would be studying comics and animation in a handful of years, I probably would not have believed it!

As someone who had studied a lot of the Spanish language but not a lot of literature upon entering the Hispanic Studies MA program, I had the rather cliché goal of wanting to find something new to say about one of the most canonical texts of the Hispanic literary world: Cervantes’ Don Quijote. However, as I completed the required coursework for the MA and PhD programs, my range of interests grew along with my knowledge of Hispanic literary and artistic movements, and cultural studies. 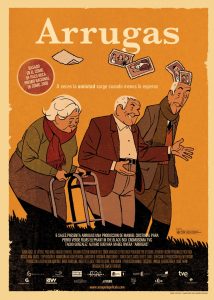 Although the body of Cervantes’ work and Golden Age Literature, in general, still interest me, one particular course on contemporary Spanish Film offered by Dr. Marisol Fernández Utrera introduced me to Ignacio Ferreras’ Arrugas (Wrinkes, 2011). This film, and the in-class discussion of it, single-handedly spurred my interest in the use of animation as a representational strategy for social and historical issues. My in-class research project on this film led me to my larger MA thesis project as I came to recognize a lack of animated documentary scholarship in Hispanic Studies, despite a proliferation of short and feature-length animated productions since the year 2000. As I transitioned to the doctoral program, a jump from Animation Studies to Comics Studies seemed a natural and enticing progression given the close relationship between the two artistic media, as well as the increasing convergence taking place between the two fields in scholarship.

What questions do you seek to address through your research?

My interdisciplinary doctoral thesis project will likely ask how the broader and historical Spanish arts scene is being interrogated by contemporary comics artists, interrupted by the so-called “ninth art,” and integrated with the language of comics.

My thesis is inspired by the fact that contemporary Spanish comics artists have very recently been engaging in dialogue with Spanish Art History in interesting ways, from commenting on Velázquez’ 1656 painting Las Meninas; studying the life and work of 12th-century surrealist Salvador Dalí; to creating hybrid projects that fuse graphic narrative with rock music and cinematography, and with comics aesthetics. All this, not to mention the recent “institutionalization” of comics with their inclusion in university libraries and course programs, as well as many renowned museums.

As a native speaker of English doing research in Hispanic Studies, I am excited about the possibility of increasing knowledge of the Spanish comics scene within Anglophone scholarship—which is largely either unaware, unwilling or unable to recognize the exciting things happening on Spanish soil.

My hope is to bridge the many exciting developments on comics theory and criticism taking place in English-language scholarship with the likewise important insights developing in Spanish-language scholarship. I hope to ultimately bring greater recognition to Spanish comics and comics artists within and beyond Spain, and within and beyond the field of Hispanic Studies. 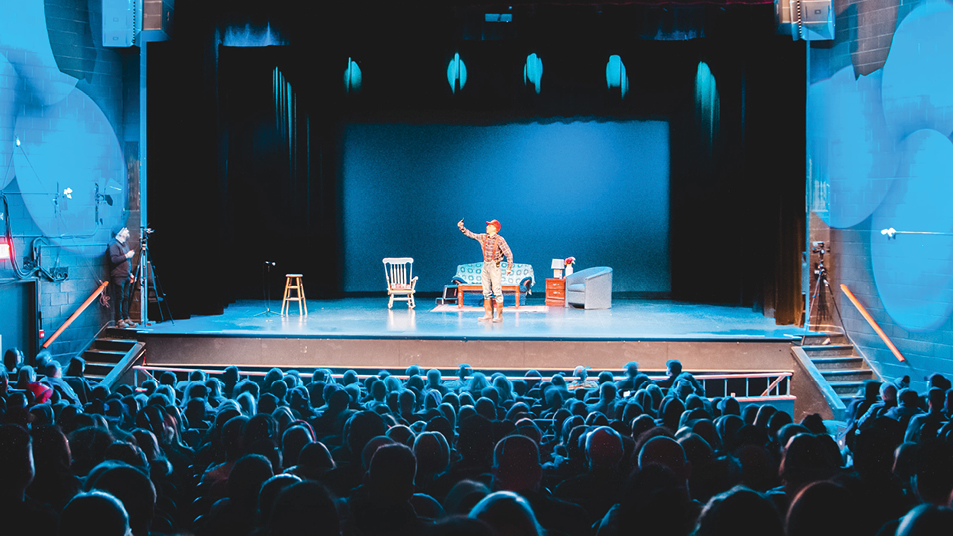