The Significance of the Photographs in the FHIS Lounge

In November 2022, UBC’s Department of French, Hispanic and Italian Studies (FHIS) installed four large-format photographs of special significance on the walls of its departmental lounge. The photographs were taken by Enrique Manchon, Senior Instructor Emeritus of Spanish, who has a long-standing personal connection with UBC spanning five decades until his retirement in 2019. In this article, Enrique describes the significance behind his photographs, along with his connection to the department. 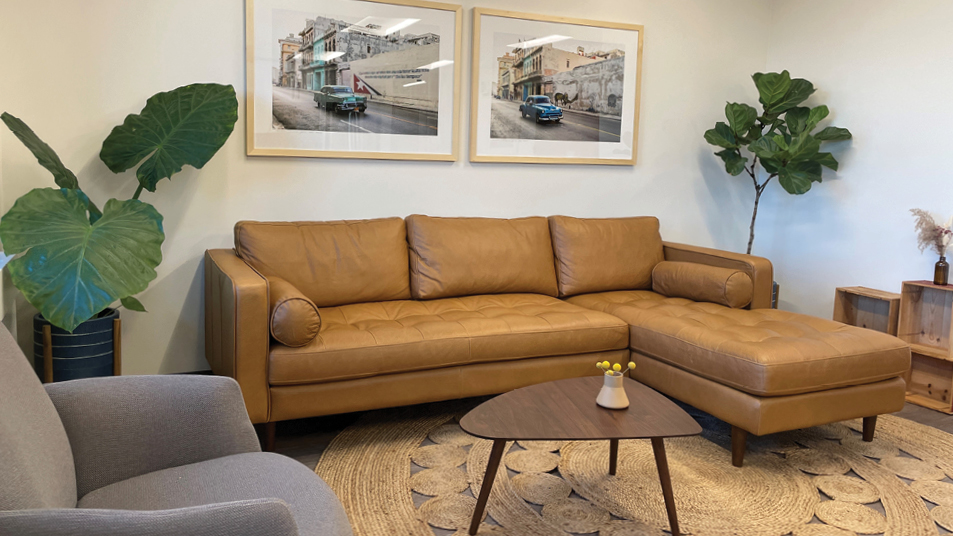 “Cuba has endured as a social space—on the one hand seemingly frozen in time, while at the same time gradually crumbling. It is this setting of palpably slow physical and economic decline that, unfortunately, makes it fascinating from a photographic perspective.”
Enrique Manchon
Photographer & Senior Instructor Emeritus of Spanish

The four photographs hanging on the walls of the FHIS lounge are part of two related photo essays about my experience in Cuba on two separate occasions. One is entitled Twice upon a place: Cuba 2008/2016. The transformation of space.  The other is Cuba waiting/Esperando: the potentialities of ‘any-spaces-whatever’. As it may be inferred by the titles, the attempt was to treat Cuba, and Havana in particular, as a unique social space to be observed.

The encompassing context of anything presently related to Havana or Cuba is, inevitably, the Cuban Revolution and its aftermath: the socio-political events that have captured the imagination of many since its beginning in 1953, and the ensuing domestic and international repercussions—social, political and economic—that emerged over the years since, and are still palpable today. Without going into the long details of the well-known narrative of the revolution, the outcome was, and still is, that Cuba—due to the communist ideology of its government and the correlated long-term economic embargo imposed on it by the U.S.—has remained a significantly strangled and isolated place. It has endured as a social space—on the one hand seemingly frozen in time, while at the same time gradually crumbling. It is this setting of palpably slow physical and economic decline that, unfortunately, makes it fascinating from a photographic perspective.

Havana, Cuba, and the Cuban Revolution, have always been sources of fascination for me. For many years I had hoped to visit and experience Cuba under Fidel Castro’s regime, conscious that the window of opportunity to witness such a unique and ongoing historical event was finite, as things were likely to eventually change and as Castro was advancing with age. I finally made it to the island in February of 2008, and by pure coincidence I was there the week when Fidel abdicated his powers to his brother Raul.

Prior to that visit, my sense of Cuba had been informed by films (such as I am Cuba, Memories of Underdevelopment and Strawberry and Chocolate), literature (Reinaldo Arenas, Alejo Carpentier and others), and music (Buena Vista Social Club, album and film), and I often used these visual texts, or texts by these authors, for critical analysis or as cultural excursions and motivational elements in my classes. So, it felt like photographs related to the Cuban and Caribbean experience would be relevant and appropriate to hang on the department’s walls. 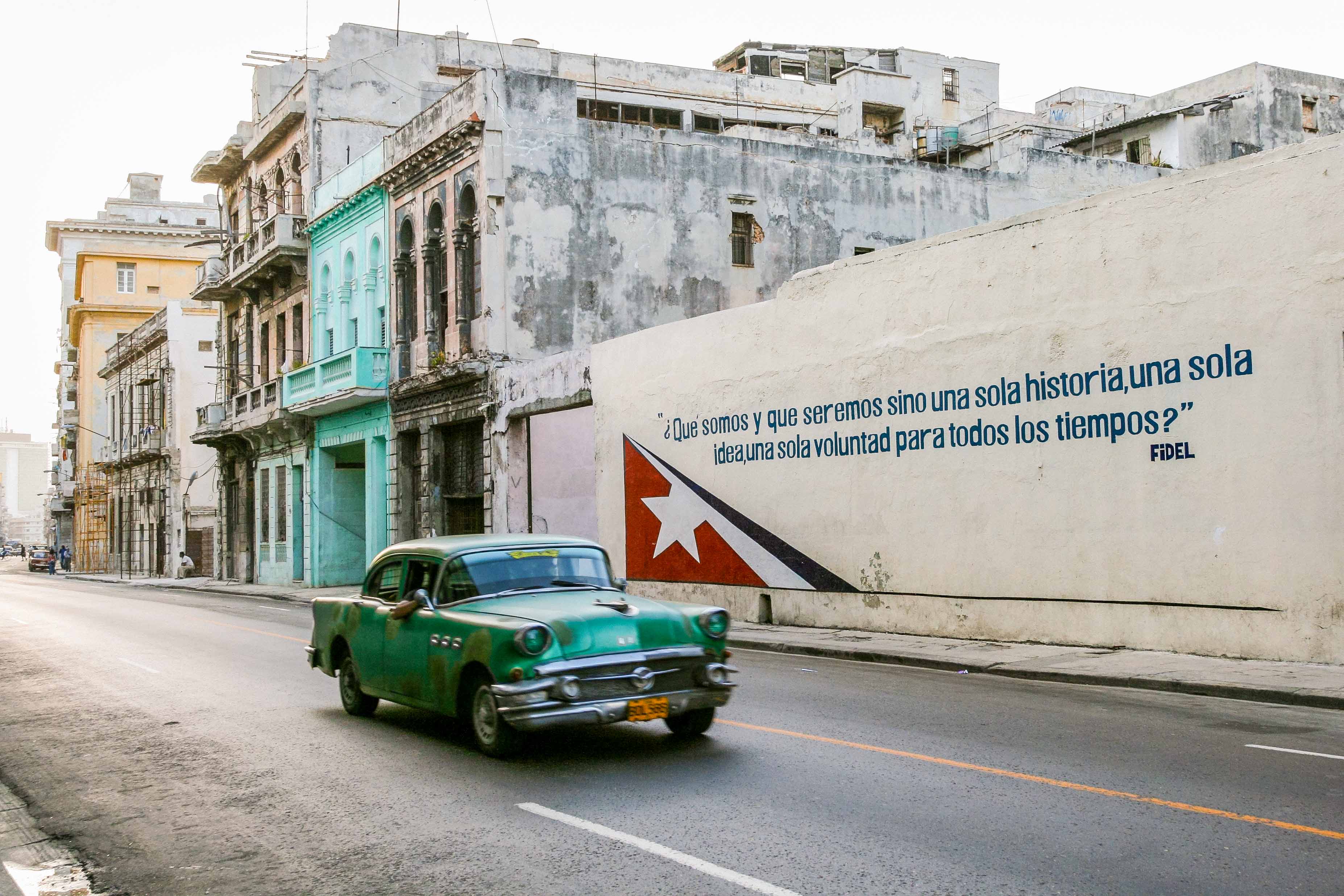 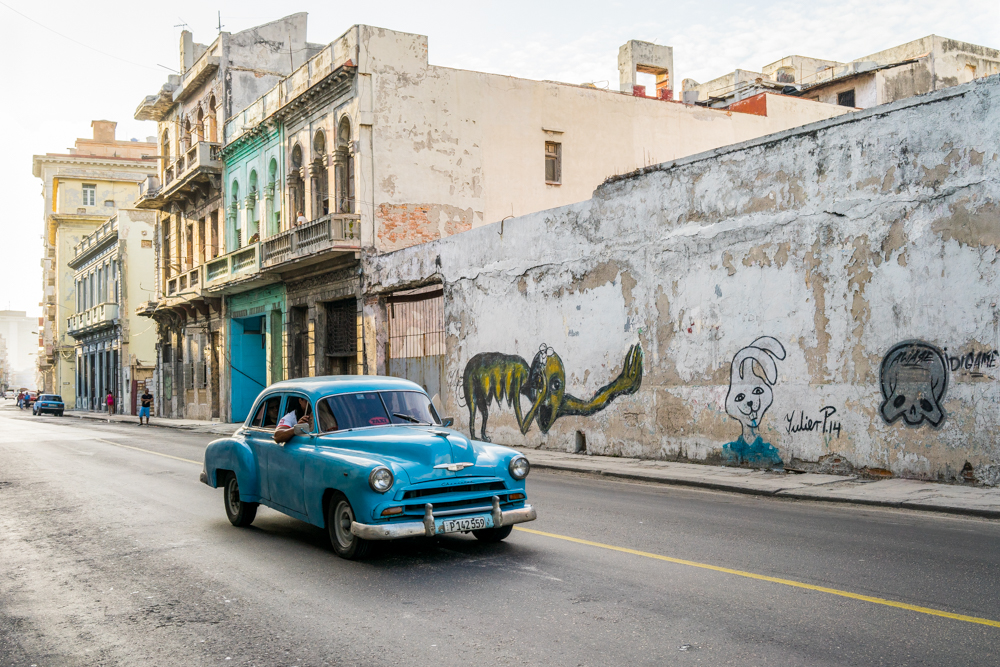 “The before-and-after shots of the same local spaces demonstrate a systematic erasure of the messages and iconic figures of the revolution.”
Enrique Manchon

One of the photo essays, and the diptych hanging in the wall, compares images from 2008 and 2016. It so happened that I found myself in Cuba in those two particular years. As I mentioned before, 2008 became significant because that year marked the time when Fidel’s leadership officially ended. So, I was able to witness and get a sense of Cuba and its social practice while it still was in its revolutionary mode under Fidel. A few months before my visit in February of 2016, Pope Francis had visited the island, and a couple of weeks after my visit both Barack Obama and the Rolling Stones would make momentous stopovers.  There was a reserved expectation of change in the air. My images from the Twice upon a place: Cuba 2008/2016 essay, arguably independent of these external factors, do demonstrate change.

As the diptych shows and the collection supports, the before-and-after shots of the same local spaces demonstrate a systematic erasure of the messages and iconic figures of the revolution. The first image (2008) of the diptych displays Fidel’s statement painted on the wall of a prominent street in Havana, and is representative of the social practice of the time. The statement refers directly to the revolution and the people of Cuba, but it also has an existential depth: “What are we and what will we ever be, but a single and unique history, a single idea and a single will for all time?” When I came across it, I thought it was a profound declaration. The second image (2016) showing that the message had been subsequently painted over, erased by graffiti and the erosion of time, is particularly evocative in contrast.

Photographically, the potential effect of the images is established by the close correspondence of the two compositions, the matching quality of light and shadows, and the style and positioning of the cars. 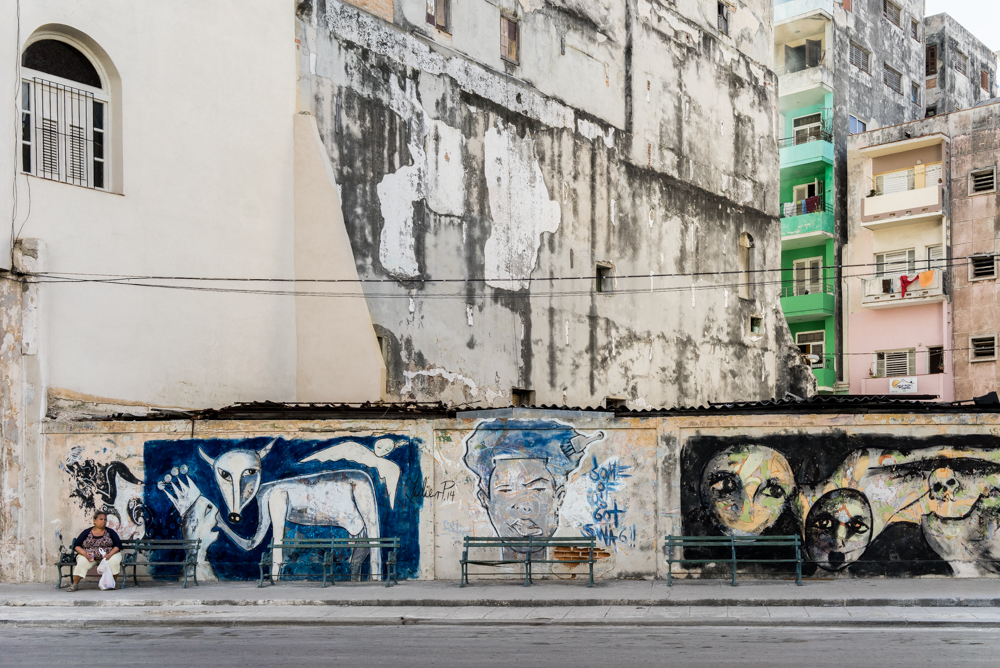 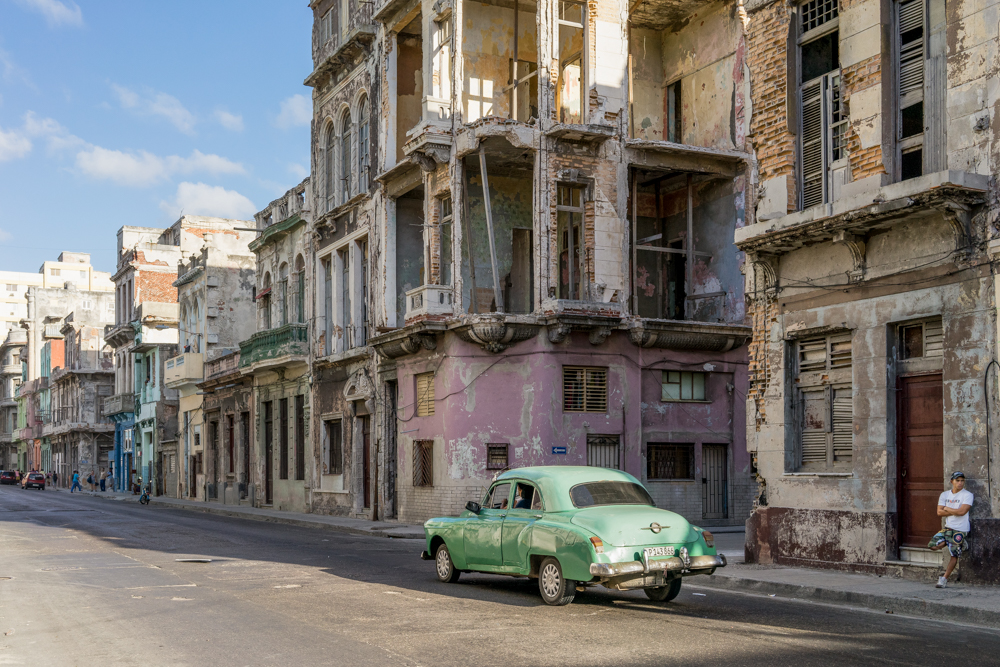 “The steady crumbling and ruination of the walls in Havana, whether by national insolvency or design, inevitably reflect an isolation and crumbling of the spirit of the people whose fate is to inhabit that space.”
Enrique Manchon

Questions of “message” when considering the impact of visual images, or art in general, can be difficult to navigate. Photographs can show and, at their best, they can suggest. I am with Baudelaire when he states that things out-there have correspondences that may be observed and deciphered by artists. Related to this, the other two photographs that hang in the room, from the Waiting/Esperando series, illustrate one of my approaches to photography. I favour and tend to be most satisfied when I capture images that have an element of suggestion. My instinctive mode of expression seems to be metonymic, metonymy being a manner of expression that works by contiguity.

In the case of the images in question, for example, in each of them there is a solitary person in a state of waiting and apparent absorption. In both cases also, the rest of the composition privileges buildings or walls in a state of disrepair, disarray or ruination. If there is a message or suggestion, it might be that the steady crumbling and ruination of the walls in Havana, whether by national insolvency or design, inevitably reflect an isolation and crumbling of the spirit of the people whose fate is to inhabit that space.

As my biographical notes below indicate, first as a student and then as faculty, I have been hanging around this unique space that is the university, its buildings, classrooms and exterior spaces, for a long and fruitful time.  Maybe it is fitting that as my images hang on these walls in the Buchanan Tower, I, or my spirit, shall also hangout around UBC for a bit longer.

My sincere thanks and appreciation to those that made it possible. 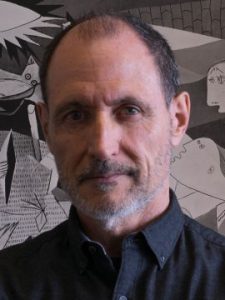 Enrique Manchon, Senior Instructor Emeritus of Spanish, has a long-standing personal connection with the University of British Columbia, one that runs deep and spans over a period of five decades. He came to UBC in 1969 as a first-year student in the Faculty of Science. He soon moved to Arts and earned a Bachelor of Fine Arts in 1973, with an emphasis in visual arts and photography. In the Faculty of Education, he completed a Certification Program for Secondary Education with concentrations in the acquisition of Modern Languages (Spanish) and Art. In 1982 he received a Master of Arts in Hispanic Studies, with a dissertation that explored characteristic developments in the post-Spanish-Civil-War novel. During his time as a graduate student and teaching assistant in Hispanic Studies, he had the opportunity to teach first-year Spanish language courses for the department. Inspired by supportive teachers and responsive students, this became a transformative experience which defined his personal development and, eventually, his professional direction.

After a formative transitional period when he taught a diversity of courses as a sessional instructor both at UBC and SFU, in 1991 he was assigned the coordination of Spanish language courses and, in particular, of First Year Spanish—the latter a position that he devotedly maintained until his retirement in 2019. His contributions to educational leadership included continuous involvement and mentoring in instructional methodology, course development, TA training and student advising. He was the recipient of the UBC Killam Teaching Prize in 2002. To this day, he affectionately values his direct engagement with students in the classroom and his collaborative rapport with a large cohort of graduate students as they embarked in their own pedagogical practices.

In conversation and walks through campus, Enrique often reflects with bemusement that when he arrived at UBC as an undergraduate student in 1969, the large trees that presently make up the well-established and serene oak grove lying between the old Student Union Building and the Irving K. Barber Learning Centre (then the Main Library), had not been planted.